The Gyst UI is an intuitive, windows based tool that generates and automatically maintains the alternate speed audio files and configuration parameters needed by Gyst at run time. The software has a handy built in documentation panel describing the parameters used by Gyst and their meanings.

Installation and Configuration Settings
The windows based Gyst UI program can be installed on the Gyst Server machine, a local or remote media server, or a different machine altogether. The process of installing the Gyst UI is relatively straightforward - simply run the GystSetup.exe program from the windows desktop.

The recommended installation directory is: C:\Gyst\Audio

Although this is not a requirement, it tends to make the navigation to the configuration and log files easier. Once the installation completes, the Gyst UI icon will appear on the desktop. Start the Gyst UI by clicking on this icon and the Configuration File selection screen shown in Figure 1 will appear. 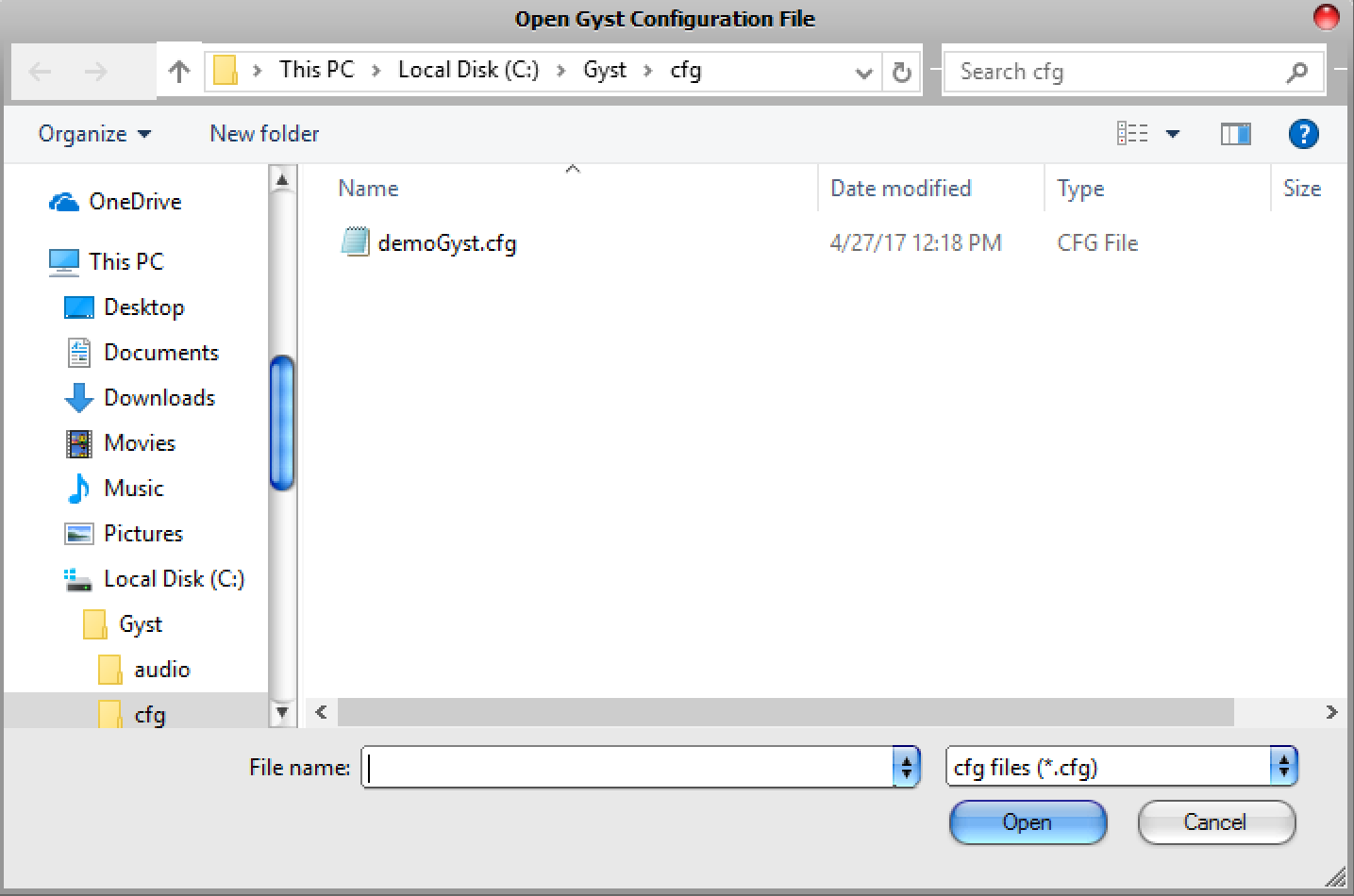 When you select the demoApp.cfg file, you will see the main Gyst UI screen as shown here... 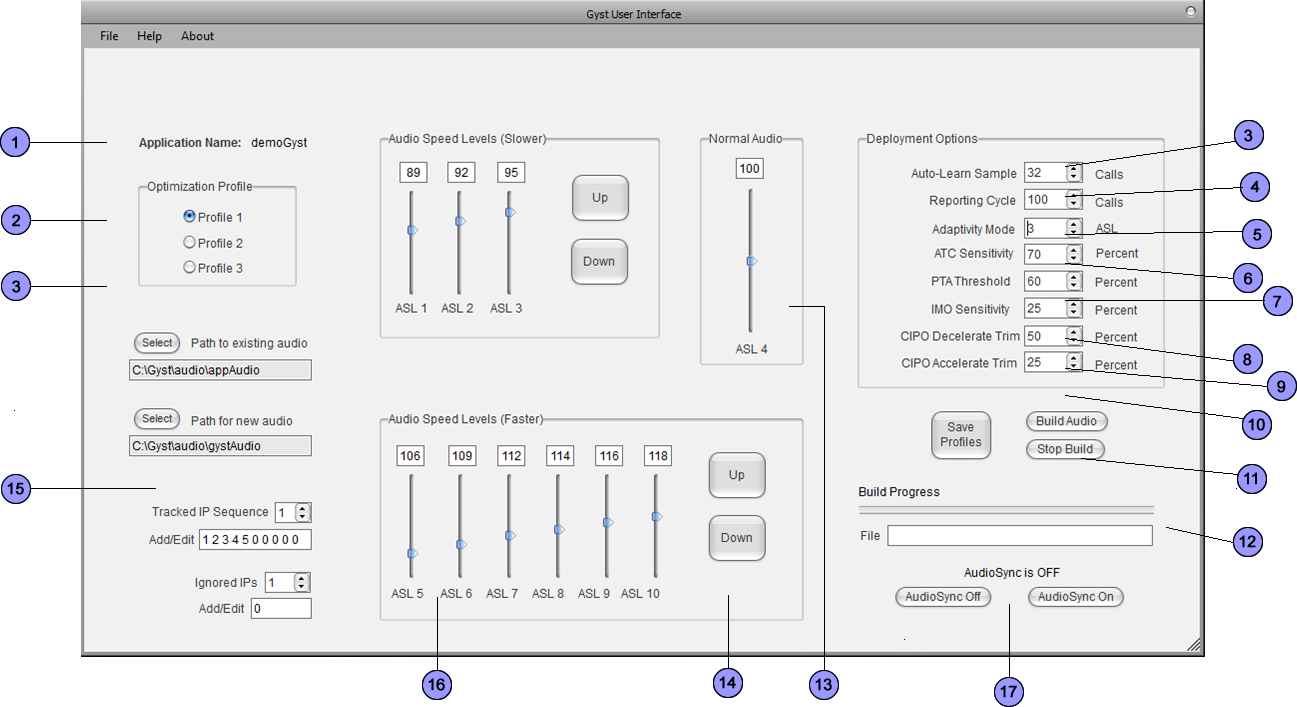 The screen appears showing the default value settings for Gyst. With the Gyst UI tool, you can...

- Maintain up to 3 individual sets of Gyst profiles

- Use the Gyst UI AudioSync™ feature to automatically maintain all audio files generated with the tool. These files are known as the Alternate Speed Audio files or ASA files

Referring now to the screen shot above, the following is a description of the labeled features on the Gyst UI and a brief summary of their function...

2. These paths represent the locations of the application audio (original digitized recordings) and location for the newly created ASA files. After the build process, the original audio files will remain unaltered.

4. This value represents the number of calls between Gyst log file updates. In addition to providing the Behavior Analytics reporting, this value determines how often parameters for the IMO and DAS features are recalculated.

5. The Control Port can be set to any valid port number in the current system configuration. Gyst functionality will not be present on this port. This will provide a baseline for comparison with the Monitor Port. Gyst provides extended reporting for this port via the log file.

6. The Monitor Port can be set to any valid port number in the current system configuration. This will provide a baseline for comparison with the Control Port. Gyst provides extended reporting for this port via the log file.

7. Input Modality Optimization (IMO) - Informs the voice application whether Speech or DTMF input has historically been more efficient and/or more successful by a significant margin at various points in the call script. A lower value means fewer IMO recommendations will be made to the voice application. This feature is also known as Smart Input Switching.

8. Proactive Transfer Alerts  (PTA) - This feature keeps a cumulative index of how well each individual caller is navigating the call script and identifies callers having excessive difficulty. When Gyst identifies such callers, it recommends preemptively transferring them to a CSR. A lower value means fewer PTA related transfers will be made. This feature is also known as Intelligent Opt Out.

9. Dynamic Application Smoothing (DAS) - Dynamically adjusts the WPM speaking rate down for any points in the call script that callers find particularly difficult to navigate. Adjustment decisions are based on the level of difficulty of each IP (Interaction Point) as represented by the historical behavioral data collected at each IP by Gyst. A lower value means fewer DAS slow down adjustments will be made. This feature is also known as Application Flow Optimizer.

10. Dynamic Application Smoothing (DAS) - Dynamically adjusts the WPM speaking rate up for any points in the call script that callers find particularly easy to navigate. Adjustment decisions are based on the level of ease of each IP (Interaction Point) as represented by the historical behavioral data collected at each IP by Gyst. A lower value means fewer DAS speed up adjustments will be made. This feature is also known as Application Flow Optimizer.

11. These buttons control the initiation and termination of the audio build process.

12. This section displays the progress of the build process and indicates when it has completed successfully.

13. This panel allows for individual and master control of the desired audio playback rate increments for each Gyst Profile setting in 15 below.

14. This panel allows for individual and master control of the desired audio playback rate decrements for each Gyst Profile setting in 15 below.

15. The Configuration Profile panel allows you to build and maintain three independent profiles for each voice application you optimize with Gyst. When you build the audio for the first time, all three profiles are automatically built. Thereafter, each profile can be built independently.

16. This panel allows for individual control of the desired audio playback rate of the normal (100%) original recorded audio. This is the audio that is played to callers when Gyst is not present.

17. The AudioSync™ feature of the Gyst UI automatically updates the prebuilt ASA audio anytime there is a change to the application audio from which it was originally built. This powerful feature allows you to have all three profiles and each of their ten respective ASA sets updated anytime there is a change in application audio. Once the AudioSync™ feature is enabled, further changes to the Gyst UI screen are not allowed. To make changes in the Gyst UI after AudioSync™ has been optioned, you must first turn the feature off, then restart the Gyst UI and select the same configuration file. This preserves the integrity of the ASA files after the initial audio build. Here's a screen shot showing the warning message that is displayed when activating the AudioSync™ feature. 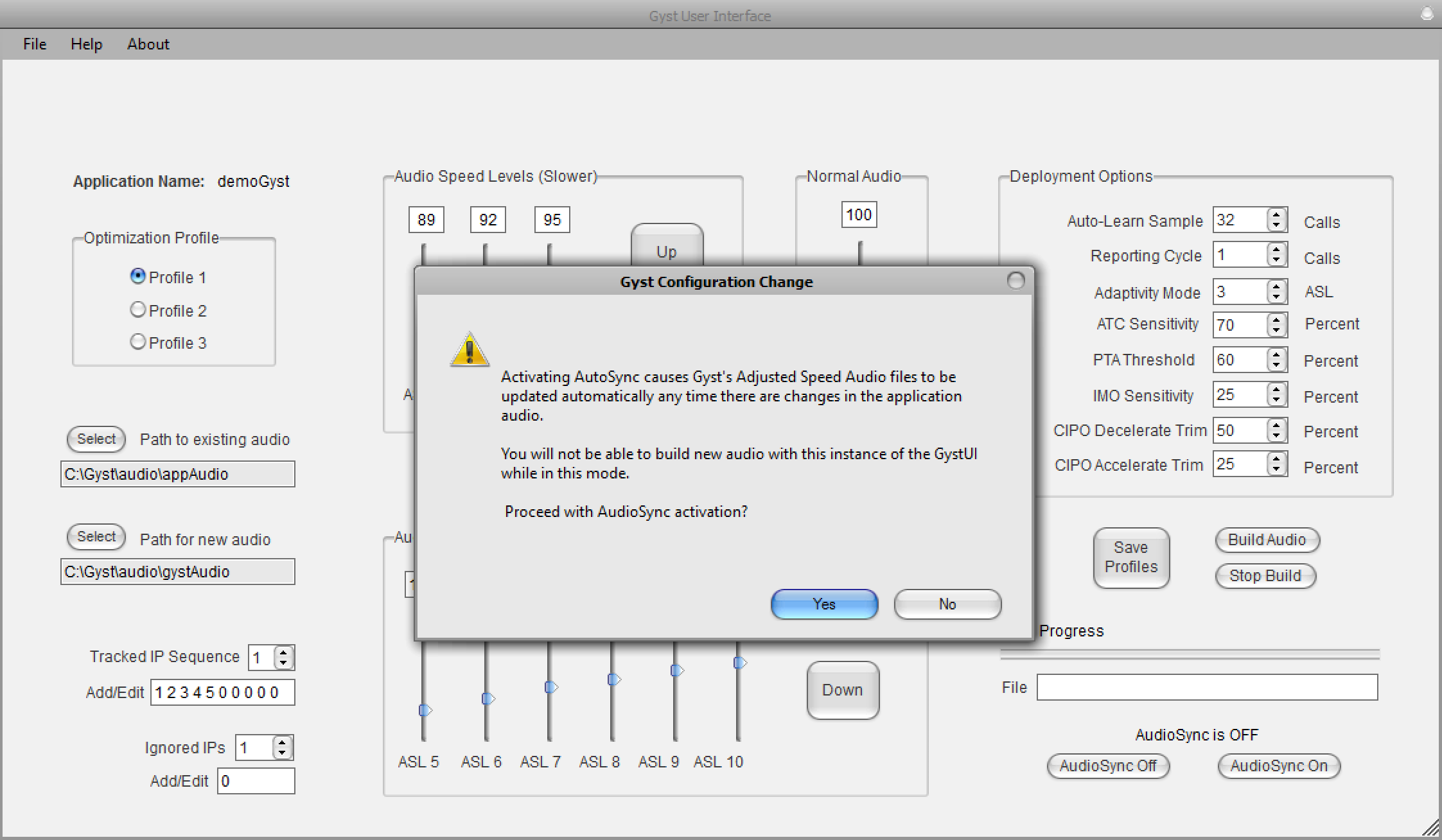 Note - As a result of changing the configuration settings and performing the build and/or AudioSync functions, the C:\Gyst audio, configuration and log files are automatically updated.

The log files contain important information regarding the build process and this can be used to verify/troubleshoot any inconsistencies that may arise as a result of performing these actions.