Provisioning Gyst for use in your AWS environment is easy via the Gyst for Amazon CloudFormation template provided upon product registration. This movie takes you through the provisioning process.

Gyst For Amazon is priced according to a SaaS model whether the customer elects to run the service from their own AWS account or have Gyst Technologies host it in a Gyst API Service production account.

The customer hosted option is offered to provide the client with a level of security and flexibility that permits them to try the service quickly and easily using their own best practices for security and network configuration as administered in their AWS account. Whether hosted via the Gyst Production or Customer AWS account, the pricing is as detailed in our AWS Marketplace listing for Gyst here.

Gyst is implemented in the customers own AWS account using the policy of least privileges. Root access is never required to provision the resources needed to support t. Security Groups should always allow access only via trusted IP addresses and using standard SSL and HTTPS encryption methods. Additionally, strong passwords and user names are encouraged for any FTP or other direct access to the EC2 instance(s) generated via the Gyst For Amazon CloudFormation Template.

Gyst Technologies highly recommends that users of its Gyst For Amazon web service adhere strictly to Amazon's own guidance and protocols as defined in the AWS online documentation here.

Gyst For Amazon is priced according to a SaaS model whether the customer elects to run the service from their own AWS account or have Gyst Technologies host it in a Gyst API Service production account.

The customer hosted option is offered to provide the client with a level of security and flexibility that permits them to try the service quickly and easily using their own best practices for security and network configuration as administered in their AWS account. Whether hosted via the Gyst Production or Customer AWS account, the pricing is as detailed in our AWS Marketplace listing for Gyst here.

Figure 1 below provides a list of the files required to add Gyst to your Amazon Connect and Amazon Lex voice applications. These files are located in the Amazon S3 Gyst bucket named “gyst-distribution”. Details on how to access these files are provided at the time of purchase. 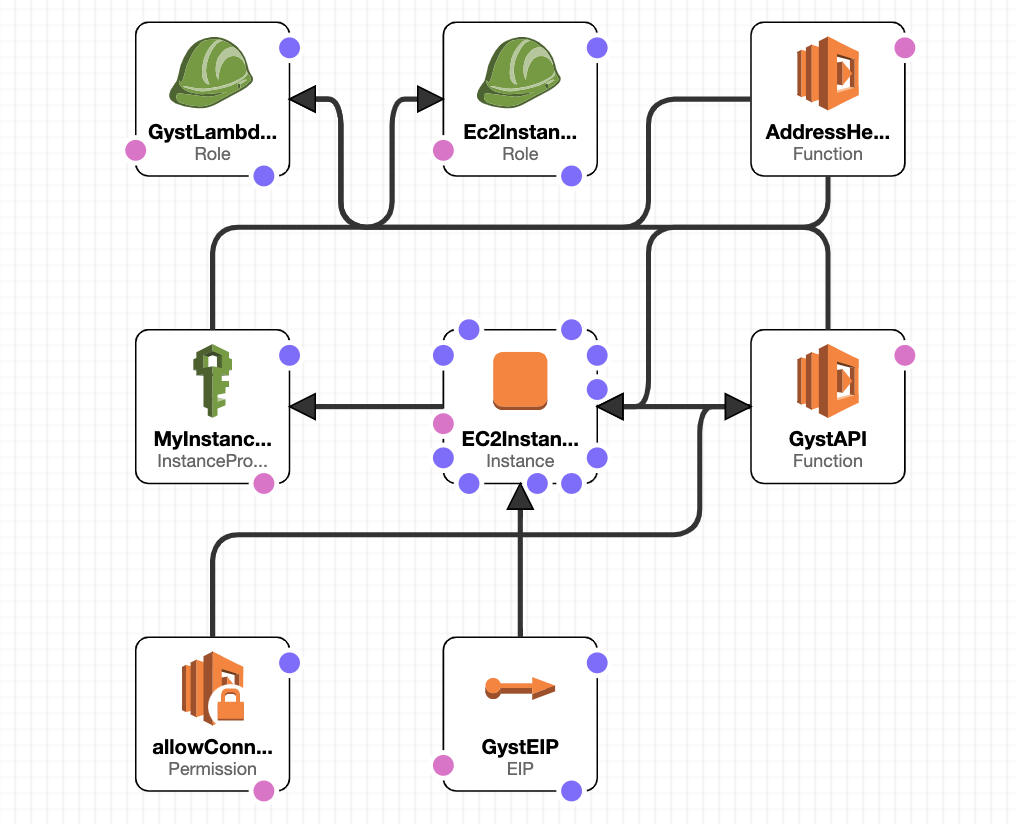 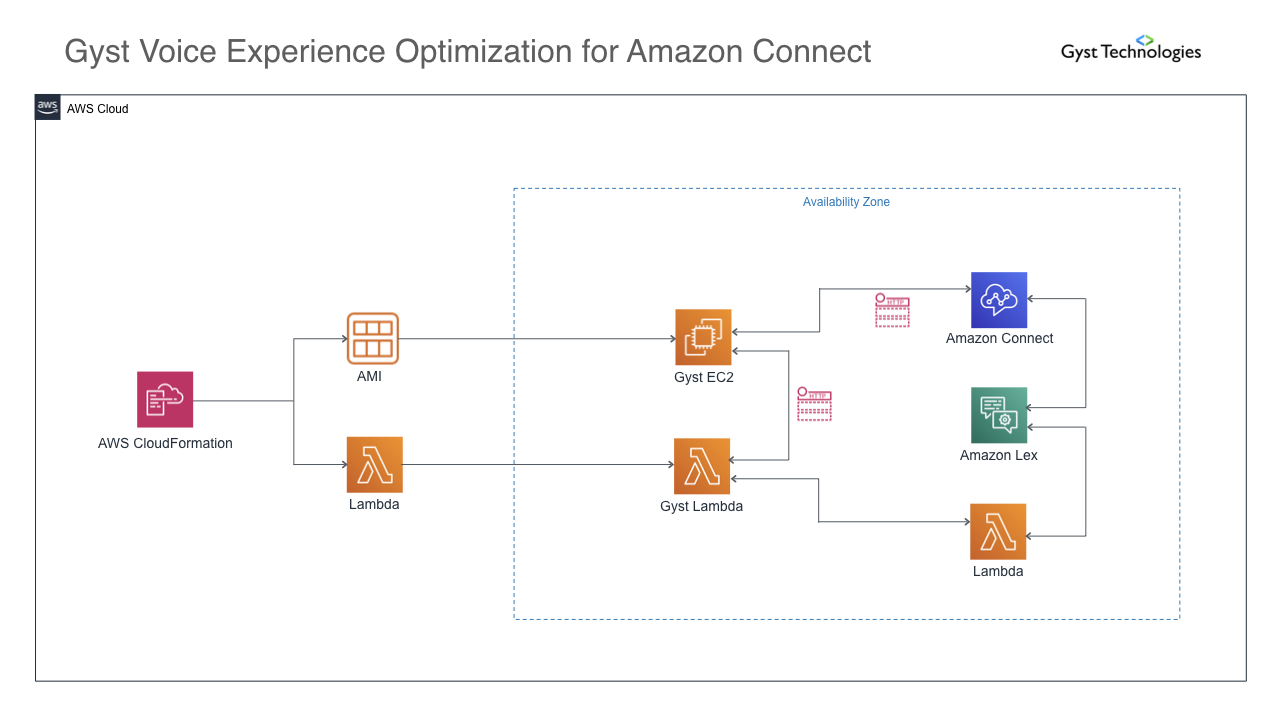 The key AWS resources generated via the CloudFormation Template are the Gyst EC2 instance and Gyst Lambda functions as shown in Figures 2 and 3. Generating all of the resources required for deployment should only take about ten minutes for the majority of user configurations.
‍
The Gyst EC2 instance supports the Gyst web API, an HTTP based restful API that is directly callable from the clients Amazon Connect instance, and from the Lambda function supporting any Amazon Lex based voice bot the client is leveraging for this, or any other Amazon Connect instance. The clients existing Lambda function simply calls the Gyst Lambda named “Gyst API”. This Lambda in turn, calls the Gyst Web API that is supported via the Gyst EC2 instance.
‍
The specifications on the HTTP get/post responses and API usage are detailed in a secure area of the Gyst online documentation resource. A passcode to enable access this documentation is provided at the time of purchase.
‍
Figure 4 below shows an Amazon Connect call flow for a demo voice application that implements Gyst Technology. The template for this call flow is in the aforementioned S3 bucket. Additionally, the Gyst API and the AddressHelper demo bot code for the required Lambda functions are contained in the Gyst Installation S3 bucket, as is the Demo Lex Bot.
‍
It is highly recommended that the user download all files, build the Gyst Stack as shown, and then ping the Gyst EC2 instance via a dedicated Elastic IP and per the API calling instructions contained in the Gyst Online documentation. Ultimately, the user will want to dial in to the Connect instance and hear the call flow from beginning to end. This assures that the Gyst Installation procedures have been carried out correctly, and that the Gyst EC2 instance is ready for service for the clients Connect and Lex voice applications. 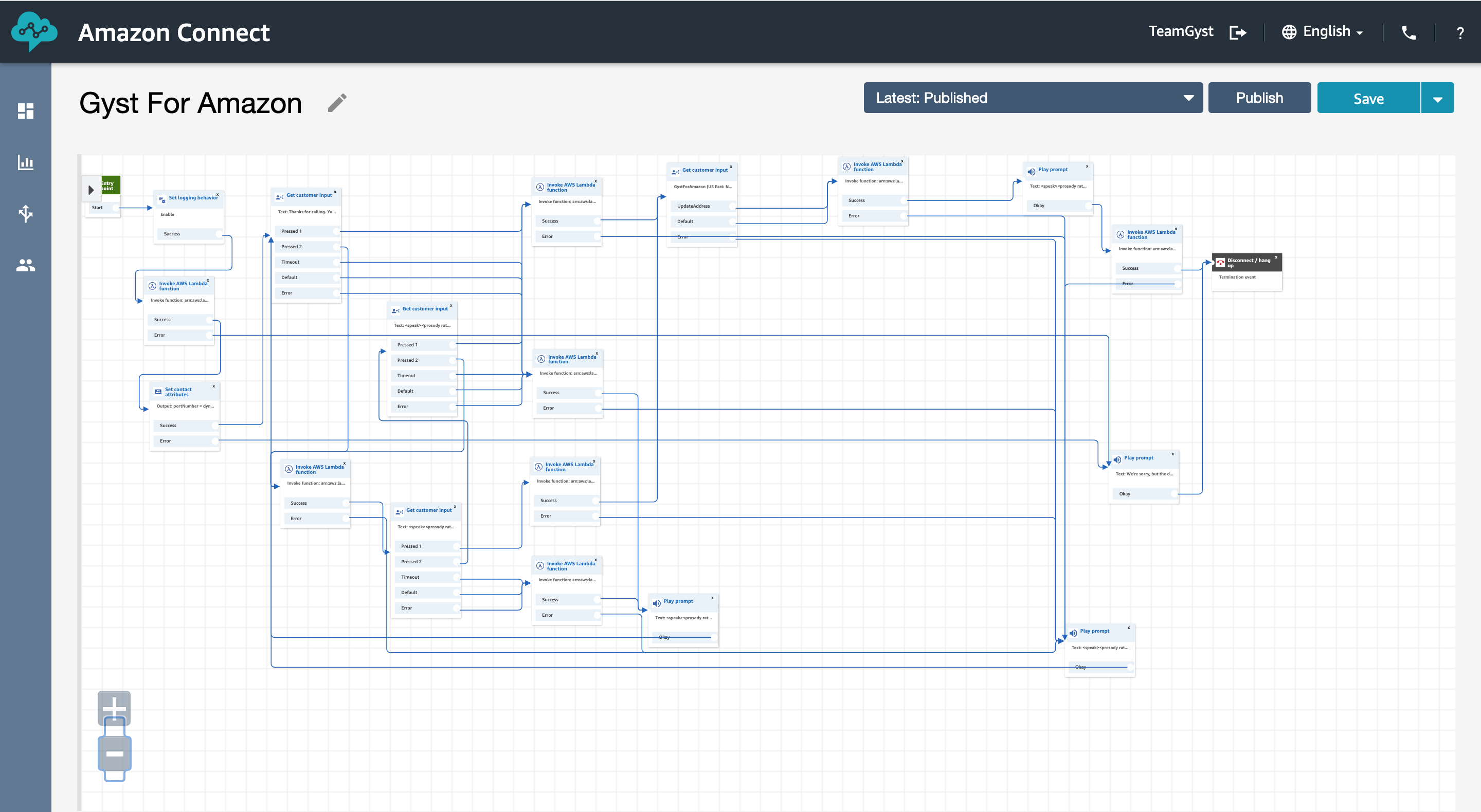 In production, the clients Amazon Connect and Lex instances call the Gyst API each time the caller responds. A single Gyst API call is also added at the beginning and end of each phone call. In both Lex and Connect, the SSML prosody tag is adjusted based on caller behavior in each service. Examples of how to implement this in the Connect blocks and Lambda code are given in the demo.
‍
The Gyst Recommendation Engine, which is supported via the Gyst EC2 instance and reachable via the Gyst API, handles all audio playback speed change recommendations based on machine learning techniques and our proven algorithms for learning caller behavior. Also included are recommendations for caller timeout adjustments, input modality switching, and alternate voice content messaging. The service also includes Gyst’s high resolution caller behavior analytics which analyze performance metrics in real time, and report on the overall voice application efficiency over time.
‍
While the CloudFormation template and documentation provided at the time of purchase will fully implement the services outlined below, it is anticipated that the client will require some additional guidance from Gyst Technologies to accomplish this. This guidance is provided as part of the initial sale to the client.

Implementing Gyst For Amazon requires the addition of calls to the Gyst API to your voice application. This can be done by the customer by following the guidance on using the API.

Once the voice application has been set up to call the Gyst API, the technology will immediately begin analyzing call patterns and user behavior. It will also calibrate its own advanced software algorithms and machine learning parameters to allow it to determine how to adjust the voice experience for each caller to your Amazon Connect instance or Lex Bot user.

Thereafter, the Gyst service will continually update its internal reports as described in the Gyst users guide. These reports are available via a web browser and secure connection to the Gyst EC2 Instance. They can also be accessed via FTP or Remote Desktop to the same instance.

As part of our Gyst Customer Service Guarantee, Gyst Technologies will assist, at no additional cost to the customer, in the ready access and monitoring of these reports.

To open up a support ticket, fill out a support form here. A member of our support staff will respond within 4 hours.

Alternatively, you can send an email describing the issue, along with your customer number and contact details to teamgyst@gysttechnologies.com.

Want to learn more? Talk to an expert.